One of the most important – and most demanding – things about my work as a Portfolio Manager is the amount of reading I must do to stay informed. The world is so interconnected these days and the pace of change in the economy is so rapid that any new development has the potential to impact investments. What makes this time-consuming activity worthwhile, though, is that it is about gaining knowledge, something I have always enjoyed.

Recently, while I was reading the latest monthly letter from Niels Jensen, I was struck by a new idea, which was a way to rate all the various articles I read. The highest rating goes to a piece that informs me about something I believed that actually is not true. It is most helpful to be set straight when something you deeply believe or think you know is simply wrong. The second best kind of research is that which tells you something you didn’t know before. Clearly that adds to knowledge. The third kind of beneficial reading material is that which confirms something you already believe to be true, especially if it comes from an authoritative source and is expressed better than you have been able to explain it yourself. You can never have enough confirmation – you should be constantly testing your ideas against other opinions so they can either be confirmed or proved wrong and discarded.

Here, I want to highlight a recent short essay by Ray Dalio that confirmed something I have believed and have written about for several years. The difference is that Ray is a respected investment icon and author, so it is important to have confirmation from such an authority. Ray Dalio is the founder and head of Bridgewater Associates, probably the world’s largest hedge fund at $125 billion. He has been profiled on 60 Minutes, and is a student of economic history having written several books on the subject. His latest essay, “The World Has Gone Mad and The System Is Broken”, is the conclusion he reached after researching debt crises throughout history, published in a study called Principles for Navigating Big Debt Crises that anyone can download for free.

Dalio is saying we are in a serious mess with few ways to get out of it. Before looking at his conclusion about the way out, let me summarize the situation. In a sentence, there is too much debt outstanding today, everywhere. Debt is at historical highs and, as you can see on the following charts, it is continuing to rise even though the financial crisis ended in 2009. Governments and central banks are trying to stimulate growth by flooding the world with money, but it is not working. Meanwhile, the natural order of the capital markets has been turned upside-down because of negative interest rates. It costs nothing to borrow and, in many cases, lenders will pay borrowers to take money from them. Therefore, the primary function of the capital markets, which is to put a price on financial assets, has been derailed. Further, the amount of debt in most cases is about three times the value of the underlying assets supporting it (total debt in the economy versus GDP). At that rate, the amount of producing assets cannot generate enough return to service such a high level of debt. This simply cannot continue (i.e. “the system is broken”). 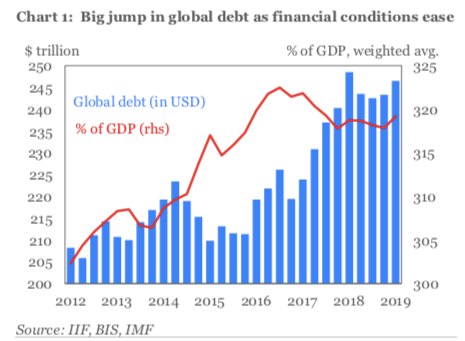 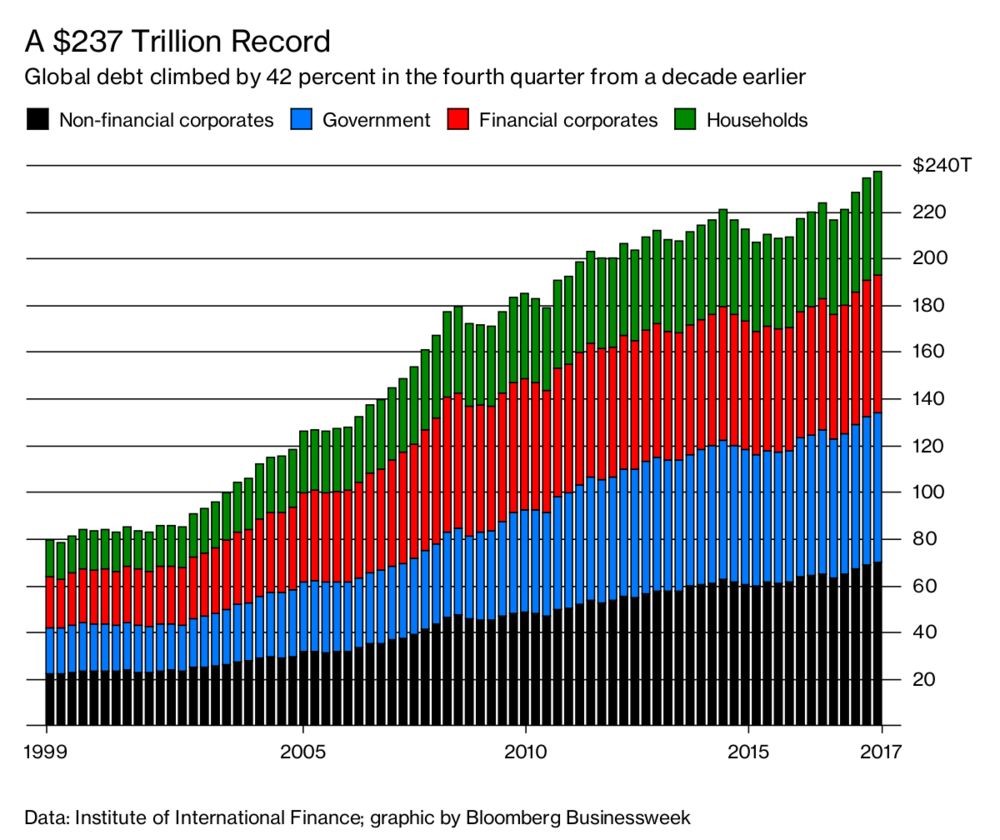 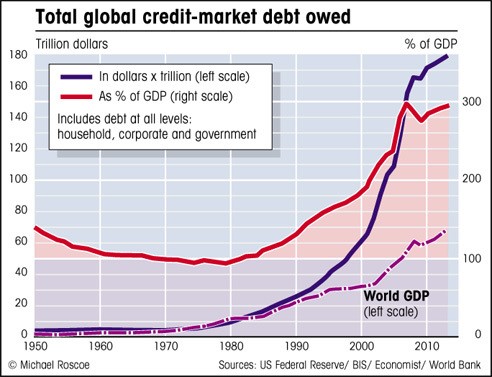 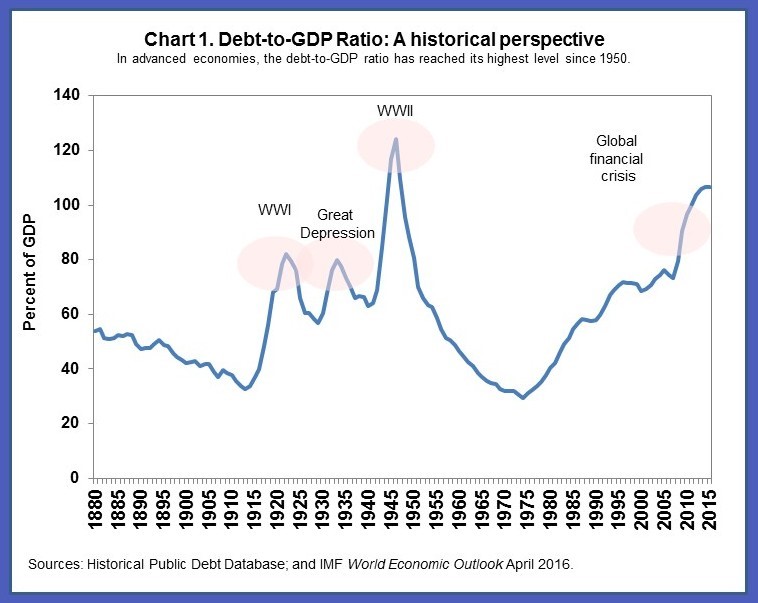 As you can see in the charts, debt is rising much faster than GDP. The economy cannot possibly grow fast enough to pay back all the debt. But there is a further problem looming in the not-too-distant future. As developed economies face aging populations and Baby Boomers retire, there will be growing demand for social security, health care, and pension entitlements. These will amount to trillions of dollars. There is no trust fund set aside to provide the funds needed to meet future social security and health care payments, and most pension funds do not have enough assets to pay the pension benefits that have been promised to retirees. And, if the foregoing mess was not enough of a problem, “progressives” want to ramp up government spending and entitlements even further, including free university education and health care. There is growing acceptance of the latest economic theory, MMT, which says that governments can provide all of these things and spend money they do not have because they are able to print an unlimited amount of additional paper currency.

With this outline of the situation facing us, let’s look at Ray Dalio’s conclusion:

Since there isn’t enough money to fund these pension and healthcare obligations, there will likely be an ugly battle to determine how much of the gap will be bridged by 1) cutting benefits, 2) raising taxes, and 3) printing money (which would have to be done at the federal level and pass to those at the state level who need it). This will exacerbate the wealth gap battle. While none of these three paths are good, printing money is the easiest path because it is the most hidden way of creating a wealth transfer and it tends to make asset prices rise. After all, debt and other financial obligations that are denominated in the amount of money owed only require the debtors to deliver money; because there are no limitations made on the amounts of money that can be printed or the value of that money, it is the easiest path.

Although Dalio does not express it in these terms, what he is saying is we can expect debasement of fiat currencies that will cause general inflation. This has happened many times throughout history, and it is evident right now in Argentina, Venezuela, etc. There is a limit to how much taxes can be raised. Also, benefits cannot be cut - the majority of voters will not allow it. The mass electorate has steadily voted themselves more and more benefits since Bismarck started social welfare in Germany in 1883 and the number of voters doubled with universal suffrage after the end of WWI, with growing benefits financed by the introduction of income taxes in 1913 (USA) and 1917 (Canada). The trend in both welfare entitlements and taxes has been straight up for over 100 years and it is accelerating rather than reversing. Demographics will exacerbate it.

Dalio’s conclusion above was expressed even more eloquently and succinctly (at the Mauldin Strategic Investment Conference in May 2019) by Canadian economist William White who has worked for the OECD and at the Bank for International Settlements: ”In the end, the only way out of this mess is inflation.”

So what does this mean for investors? We cannot know exactly how the future will evolve, but forewarned is forearmed. We can anticipate coming inflation and prepare for it even though there are no signs in the economy today, except for rising asset prices (stocks, bonds, real estate, etc.). In the past, inflation has not been good for P/E multiples, so high multiple stocks may be vulnerable. Obviously, inflation is a serious negative for bonds as interest rates will rise driving bond prices down. The best protection historically has been exposure to hard assets, such as commodities. Almost all commodities are priced in US dollars. The go-to hedge for inflation has always been gold, but silver will follow in a gold rally as well. Base metals that are in a supply/demand balance should provide protection, especially copper, and even oil should benefit, being the world’s largest and most fungible commodity. Real estate has generally held up well in an inflationary environment. Also, infrastructure comprises hard assets, like airports, highways, power plants, pipelines, etc. Beyond these, any business you invest in should have pricing power so that they can offset the impact of inflation on their cost of doing business.

As confirmation of the foregoing, I will cite economist Louis-Vincent Gave of Evergreen Gavekal in their August letter: “….in a scenario of higher government spending funded by central bank generosity, what increasingly looks like the start of a new gold bull market makes plenty of sense. Beyond precious metals, another logical destination for investors should be real assets – real estate, REITs, high dividend-paying stocks and commodity producers…”

Even if you correctly anticipate coming inflation, successfully navigating such an environment to achieve your retirement goals is not going to be easy. You need a plan and a good investment advisor. If you would like to discuss this further, call me to arrange an appointment.

This information, including any opinion, is based on various sources believed to be reliable, but its accuracy cannot be guaranteed and is subject to change. CIBC and CIBC World Markets Inc., their affiliates, directors, officers and employees may buy, sell, or hold a position in securities of a company mentioned herein, its affiliates or subsidiaries, and may also perform financial advisory services, investment banking or other services for, or have lending or other credit relationships with the same. CIBC World Markets Inc. and its representatives will receive sales commissions and/or a spread between bid and ask prices if you purchase, sell or hold the securities referred to above. © CIBC World