Investor sentiment can often tell us a lot about market behaviour and can be considered to be a contrarian indicator. When someone is “bullish” on the market, they believe that prices will rise, where someone who is “bearish” believes that the prices will fall. Essentially this means that when investors are abnormally bearish, this is proven to be some of the best times to buy stocks, and that when investors are abnormally bullish, that there is the potential for a correction or pullback in the near future.

American Association of Individual Investors has been conducting a weekly survey with their members since 1987 with only one question: do they feel the direction of the stock market over the next 6 months will be up, no change, or down? That’s nearly 1800 weeks of data based on how investors feel about the market. So, what has that shown? We spent some time breaking down the data below.

On April 28th, 2022, it showed that investors are the most bearish they have been since March 2009, and the sixth most bearish week since the survey started. 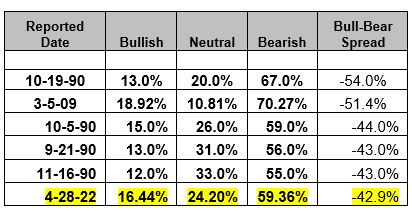 What is this information telling us, and why does it make a difference to our investment portfolios? It’s what followed these periods that provide us the most information, so let’s take a look:

As humans, we focus on information that is most recent and readily available to us, and often we don’t look back on important historical data and similar periods in history. The media has such an immense impact on how we feel towards so many things on a day to day basis, stocks and investing included. As of late, the majority of headlines around the stock market and the economy have been negative. “Stocks Plummet”. “Bear Market Territory”. “Recession risk has risen”. These headlines instill a sense of panic and fear in investors, which can make us forget that these periods have happened before, and will happen again, but we’re ultimately in a higher place today because of them. Despite all of these negative periods in history, the S&P 500 has risen from 307.12 in October 1990, to 4015.20 at the time of writing this article.

There will still be a rocky road on the way up, but the key to successful investing is staying the course of the investment plan put in place for you, and sticking to the principles of investing that have helped successful investors build their wealth for many years. If these numbers show us one thing, it’s that over time the market will increase, so time in the market is always more important than timing the market.

We are by no means saying that history is going to repeat itself, but as Mark Twain says, it often rhymes.

This information, including any opinion, is based on various sources believed to be reliable, but its accuracy cannot be guaranteed and is subject to change. CIBC and CIBC World Markets Inc., their affiliates, directors, officers and employees may buy, sell, or hold a position in securities of a company mentioned herein, its affiliates or subsidiaries, and may also perform financial advisory services, investment banking or other services for, or have lending or other credit relationships with the same. CIBC World Markets Inc. and its representatives will receive sales commissions and/or a spread between bid and ask prices if you purchase, sell or hold the securities referred to above. © CIBC World Markets Inc. 2022.

Clients are advised to seek advice regarding their particular circumstances from their personal tax and legal advisors.

Adam Slumskie is an Investment Advisor with CIBC Wood Gundy in Sault Ste. Marie. The views of Adam Slumskie do not necessarily reflect those of CIBC World Markets Inc.

Navigating Volatility: To see the rainbow, we need to endure the storm