The beginning of 2022 has brought about some market headwinds, so I wanted to take some time and reach out to provide some of our thoughts on a few of the predominant topics in today’s economy. I’m going to forego a lot of the commentary on long-term investing, market cycles and why we should continue with the investment plans we put in place.

First and foremost, we should remind ourselves that the capital markets implications of the conflict are substantially outweighed by the personal toll on Ukrainians, many of whom are facing extremely hostile conditions. Our hearts go out to those in this terrible situation.

We have been diligently reading and listening to commentary on what the research reports, economists, presidents, and ex-military personnel have said about the war. One common theme in all of these commentaries is that no one can say with any certainty how this will end. It is this uncertainty that has caused some of the market volatility that we have seen in the past month or so, and until there is more clarity and a sign of a resolution becomes more apparent, we will likely continue to see this volatility.

That said, as with any crisis, the market turns long before the crisis is over. We can look at COVID-19 as the most recent example of this. We believe that eventually a resolution will occur, whether it be good or bad for the people of Ukraine, but with lasting monetary pain felt by Russia. The people of Russia will likely feel some economic strain as a result of the sanctions that have been imposed, but the probability of these sanctions being enough to make Putin back down is seemingly quite low. What they may do is expedite a resolution, which has the potential to turn markets back around very quickly. It is impossible to know exactly when that will happen and it could be some time, but we are conscious that wars do eventually end and when that happens, or quite possibly before, markets do recover.

Oil is rising for a multitude of reasons, the most important of which right now are supply chain disruptions, inflation, and the war in Ukraine. On a global scale, Russia is only responsible for about 2-3% of world gross domestic product, but roughly 12% of oil production. This would lead us to ask why don’t other oil rich countries – Canada, Saudi Arabia and even the US - just ramp up their production to minimize overall impact caused by Russia? First, oil producers can now earn an approximate 20% increase on their product, with no further output costs – not a bad deal. Secondly, it seems many oil executives are wary of ramping up production. Increasing production would be a huge rise in cost to their business, and in the event that there is a compromise or end to the war, we would have to assume it would come with a deal by Russia to have their sanctions lifted. This would immediately flood the market with oil and cause the price to decrease substantially.

Watching the trade activity in oil futures, it is evident that the market is somewhat aware of this potential and after light crude peaking in the $130 range, it has settled back down to around $100. Keep in mind, chasing these uptrends that have risk to the downside are often how investors lose money, so it’s why we haven’t been overly keen on adding much oil over this period. We have to be careful on analyzing if this is a long-term or short-term trend. We also have to acknowledge that oil can be one of the better performing assets during inflationary periods, so some of the price increases have to be accounted for with that in mind. I think there is a delicate balance in the world right now and the market has been stuck trying to decide if inflation can somewhat abate with improved supply chains and a tick up in interest rates, or if it is something that creates larger and longer-term consequences for the consumer. Until there is some clarity on that front, again, we will likely continue to see increased market volatility.

Rates are going higher, there is no doubt in our minds about that. The push on money supply through COVID has made it necessary. I’ve mentioned this a few times in client discussions, but what I remember so clearly in 2008 was a sort of “buyer strike” when inflation started to tick up. It helped tame it and in the end, inflation was never an issue. The issue this time around is that Covid has created such a supply shock and back up for products that you just have too many consumers chasing too few products. This could fix itself over time, but likely the Federal Reserve and other central banks will have already reacted. Markets generally react poorly to rate rises on the short term, but well over the long term. We don’t feel like these interest rates increases are completely negative for the market or your portfolios, as higher rates create better fixed income rates over time.

Recessions are defined as two negative growth quarters of gross domestic product. Something I’ve taken note of in the last few years, is the speed at which available information is priced into the market. If you think back to 2020, within the period of a month or so, North American markets dipped between 25%-35%, without any major severity in Covid cases yet. It was more of the unknown that caused the downward move. Now more than two years later and with multiple unknowns in the market, we’ve seen a recession type market move. I’ve attached the returns in the major market indices as of April 29th at Noon. 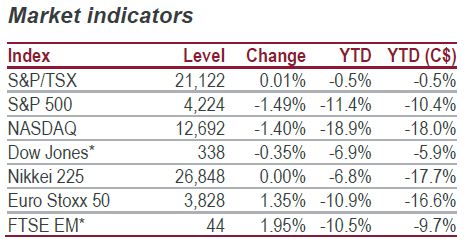 The word recession has popped up in many headlines and some potential warnings of a recession have shown up. That said, even if it does show to be true and we are entering a recession, has the market priced a lot of this in at this point? Some would argue they have. COVID losses after March 2020 were recouped in about five months, and it could be argued COVID got a lot worse after that point. Keep in mind the market is a forward looking tool, not always what is happening at the moment. As a note, we view the three month 10 year US Bond Yield as the best indicator of a recession and as you can see below, we aren’t near dipping negative. In fact the last 5 recessions were proven a year or so after this chart dipped into negative territory.

Our view is that corporate earnings appear to still be strong. A lot of supply issues will get behind us at some point and the market will continue to move forward. A recession will be in the cards at some point, although we don’t think it will be in the near future. If it does occur, we need to keep in mind how much of that is priced in currently and that the market generally turns before these events are over.

Although our outlook in the near term is cautious with the above issues causing daily fluctuations, we always keep in mind that we invest for the long term. We are optimistic that the market will be higher in 6-12 months, and as difficult as it is to see past the uncertainty we are facing now, we feel you’ll be better off as an investor in the long term. We have to remember that the market prices in the information that is immediately available, and if there is uncertainty, that pricing is often to the downside. I think the current negative information to start the year has set up the potential for a strong second half to the year which we will keep in mind as we move forward. We are cautious about the headwinds we mentioned; however, we’re fully aware that as news indicating positive changes eventually makes its way to the headlines, the market should continue to move forward on its positive trends. 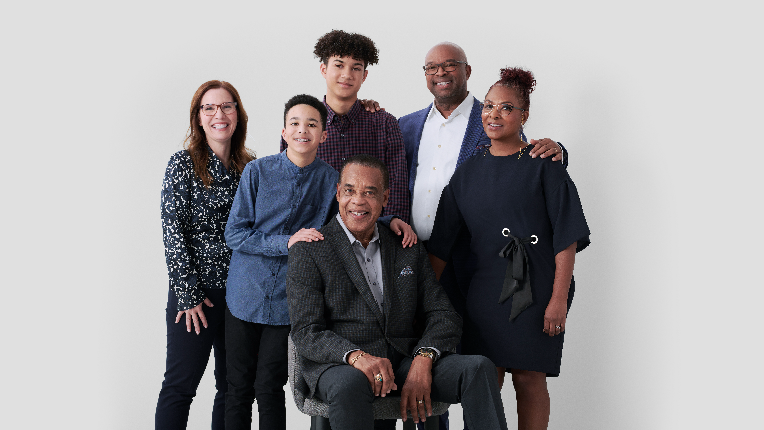 Client Appreciation Day: Today, we want to take a moment to say thanks

As your wealth advisor, I truly appreciate that you’ve entrusted me and my team with your wealth goals. I’m sharing this sentiment as today we celebrate Client Appreciation Day at CIBC.