Navigating Volatility: To see the rainbow, we need to endure the storm

As we approach the mid-point of 2022, I wanted to take some time to recap the markets. It has been an interesting first half of the year to say the least: The S&P 500 logged its worst first half performance since 1970, inflation is at a 40 year high, an ongoing geo-political war, and the Bank of Canada and Federal Reserve are playing catch up to raising rates against the largest percentage increase to the money supply in history.

I spoke a bit about indicators of a recession in our last write up. It’s hard to see a recession on the near time horizon with employment being full, rates still relatively low and a strong consumer, amongst other points. However, the Federal Reserve’s goal is to get inflation in line. The tool to do that is to raise rates, and if moved too high, a recession can also be forced upon the country to curtail spending. This may be the end result, but the battle back and forth is whether they can curb inflation without causing this. It’s certainly possible, but with inflation being stubborn, it may prove very difficult to do.

The last time the Fed has moved rates at this pace was 1994. I’ve received a lot of questions on why moving rates challenges the stock and bond market. For stocks, it has a two-prong approach. For companies who borrow, it costs them more and therefore can influence growth and profitability. For the consumer, it works to lower the amount of borrowing, so overall less economic spending. For fixed income, it makes the current bonds in the market less attractive and therefore lowers their value until the eventually come due at maturity. In fact this has been the third worst year for a 60/40 portfolio in history.

This is not all bad news. As I have mentioned before, once bonds return some value and mature, we now have much higher rates that we can. For stocks, this is a bump in the road. Eventually companies adjust to higher rates, inflation allows them to raise prices, and higher profitability returns. It takes time, and the current uncertainty causes that aggressive sell off which, over a longer period, has generally proven to be an excellent buying opportunity. As we’ve always said, the volatility is the price of admission to get superior returns over your investing career. We’re going through it now but as always, it won’t last forever. It just feels that way as you are in the midst of it. 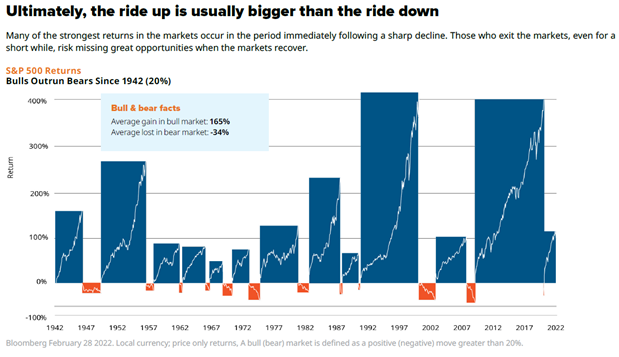 Some important things to remember during this period:

If nothing else, I would have you take this note as a report of my increasing optimism that things will get better. Maybe not today or tomorrow, but they will. Looking back to 2008 when major US banks were filing for bankruptcy, I remember thinking “how could things get better from here?”. But here we are today, we survived. Since that point, the S&P 500 posted returns of 524.90% as of June 22nd, 2022 (officialdata.org). We will get through this period, just like we have made it through all of these other difficult periods. We know it’s hard to see through the short-term pain, but you will come out in a better position.

Adam Slumskie is an Investment Advisor with CIBC Wood Gundy in Sault Ste. Marie. The views of Adam Slumskie not necessarily reflect those of CIBC World Markets Inc.